The award is expected to climb when U.S. District Judge William T. Hart adds punitive damages for Allstate’s violations of the Fair Credit Reporting Act, the lead attorney for the employees, Robert D. Sweeney of RDS Law LLC, told Chicago Daily Law Bulletin on Thursday. They failed to give them copies of the investigation report.

The employees were fired in December 2009 for allegedly timing trades to boost their own incentive bonuses by $1.2 million. The company said it might have cost portfolios more than $200 million over six years.

Allstate sent a memorandum to 355 co-workers and in a 2010 filing with the Securities and Exchange Commission about the alleged violations.

They weren’t specifically named but the six in a suit claimed it was enough to identify them.

“If you connect the dots, you would be led to believe it was my guys who did this,” Robert Sweeney, a Chicago lawyer representing the four former Allstate employees, told the Chicago Tribune. “It ruined their careers.”

Sweeney said the four were just buying low and selling high while executing trades at the direction of the company.

Rivera was head of the equity division. The other three were part of the growth team.

The lawsuit took six years to get to trial and was announced June 21. The jury deliberated for five hours over two days, awarding the employees $27.1 million, including $10 million in punitive damages.

“Allstate disagrees with the jury’s verdict,” Allstate spokeswoman Laura Strykowski said in a statement Thursday. “We continue to believe in our case and are reviewing our post-verdict options.”

The company disband the equity division in October 2009, outsourcing management of equities to Goldman Sachs. Two months later, the four employees were terminated because they violated the conflict of interest provision of the company’s code of ethics, according to the lawsuit.

The award is the highest defamation verdict in Illinois, according to John L. Kirkton of the Jury Verdict Reporter, a division of Law Bulletin Publishing Company.

“They’ve been out of work and underemployed for six years, so it’s a very satisfying reward,” Sweeney said. 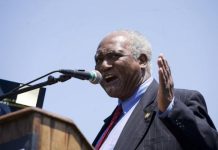