CHADBOURN, N.C., Aug. 4 (UPI) — A former public works employee in a North Carolina town said the acting town manager took a photo of his partially exposed backside and showed it to colleagues.

Johnny King, a former public works supervisor for the Town of Chadbourn, said acting Town Manager Patricia Garrell took a picture of his partially exposed backside while he was repairing a water leak and she showed the photo of his “butt crack” to the whole department the next day.

“She…knew better than to do something like that,” King told WECT-TV. “In her position of all things, you don’t try to belittle somebody in front of everybody.”

King said his complaints about Garrell and the photo led town officials to hold a series of closed session meetings on the subject, but no actions were taken. He said officials penalized him for complaining with measures including revoking his privileges to a take-home public works vehicle and adding him to the weekend on-call list.

King said he was fired April 8 of this year and the termination referenced a visit he made to the Equal Employment Opportunity Commission in Raleigh, where he filed a complaint against the town alleging a hostile work environment and harassment.

The town said King’s visit to the EEOC was a violation of the sick leave policy.

However, King’s doctor, who wrote the initial note to get him sick leave for a few days in March for stress-related issues, later clarified King was excused from work, but was not ordered to remain in bed during his time away from the department.

King, who was denied unemployment benefits by the city, is appealing in court to receive unemployment. He also said he is planning to sue the Town of Chadbourn for wrongful termination. 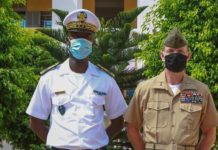 Marine Corps general fired amid probe into use of racial slur