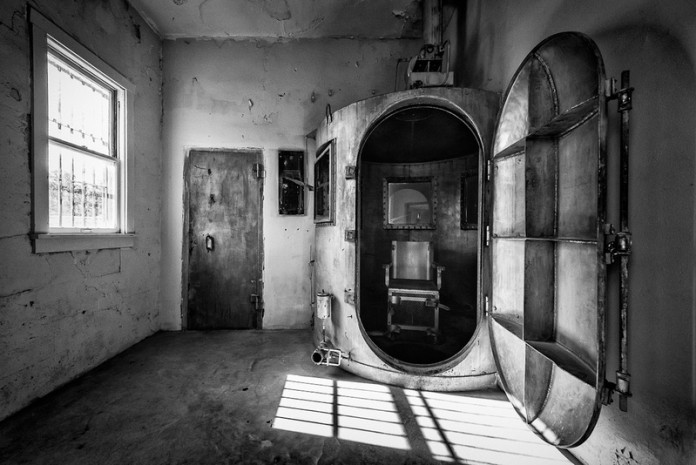 Firing Squad And Gas Chambers Are Coming Back


A bill to bring back firing squads in Utah has narrowly passed a divided legislative committee. The state currently gives inmates sentenced before 2004 a choice between lethal injection and bullets. The proposal would make firing squads the default if execution drugs can’t be found.

The last time a firing squad was used in Utah was back in 2010, when Ronnie Lee Gardner said that was how he wanted to die.

The House voted to make a firing squad the new alternative method of execution in Wyoming, with the stipulation that inmates be rendered unconscious before they are shot. The bill now goes to the state Senate. Although some are questioning why the measure is even necessary since Wyoming’s death row is empty.

Meanwhile, two lawmakers in Oklahoma are pressing the state to adopt nitrogen gas. The use of nitrogen gas, which would starve bodies of oxygen, is still an untested protocol, but they want to have it as a backup. Nitrogen hypoxia is recognized as one of the most humane methods for carrying out sentences.

How does the nitrogen hypoxia work? Well, according to the U.S. Chemical Safety and Hazard Investigation Board a high concentration of nitrogen can render someone unconscious in a few breaths, provoke a coma within a minute and eventually cause convulsions and death by hypoxia.

[/one_fourth][three_fourth_last]Executive director of the Death Penalty Information Center Richard Dieter stated, “when you start experimenting with things, you sometimes get unexpected consequences. They are winging it and that’s a recipe for more trouble.

An NBC News poll last year found that one in three people say that if lethal injections are no longer viable then executions should be stopped altogether. Others disagree: 20 percent backed the gas chamber, 18 percent the electric chair, 12 percent the firing squad and eight percent hanging.

And one federal appeals judge declared last year that the lethal-injection system is doomed and that the guillotine would be better.

Here is what a death row inmate’s final day is like:

The last day of a prisoners life is filled with rituals. Things like visiting with his family for a number of hours. Choosing a last meal in some prisons. Last meals tend to be high in calories and heavy on meat. Perhaps preparing his last words which are to be said on the gurney; a sentence or two expressing remorse, or perhaps expressing his innocence to those who have supported him over the years. All this is recorded by the prison as part of the diary of the execution.

On February 17, 2015 we spoke about whether or not prisons were going to get rid of lethal injections due to the improper use of improper drugs. Check it out here: