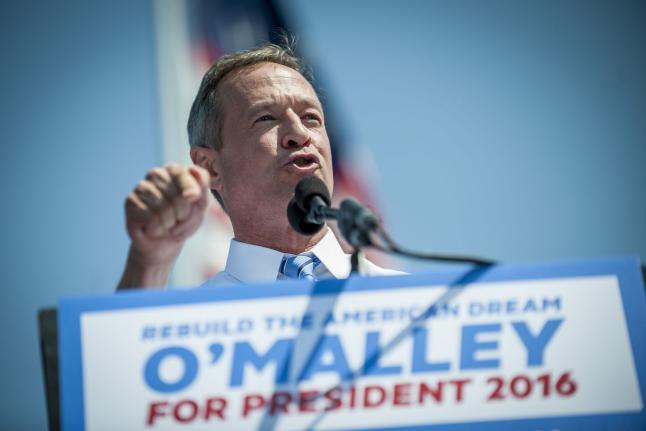 Announcing his bid in Baltimore, the city where he got his political start, O’Malley, 52, called on a new generation of leadership to “rebuild the American dream.” The former twice-elected Baltimore mayor focused on the American dream, racial tensions and climate change, laying out his plans for his campaign.

“We have saved our country before and we will save our country now. We will do that by rebuilding the dream,” he said.

Speaking at Federal Hill Park, O’Malley stressed income inequality, the need to rebuild the country and focused on the role Wall Street executives played in the 2008 financial crisis.

“Tell me how it is that in this country you can get pulled over if you have a broken tail light, but if you wreck the country you are absolutely untouchable?”

O’Malley has seated himself firmly to the left of Clinton, opposing the Keystone XLpipeline and a pending Pacific Rim trade agreement and favoring expanding Social Security benefits. O’Malley backed Clinton in her 2008 bid, but now says he represents a “new candidate with a clear voice” in changing times.

On the campaign trail, O’Malley has touted his eight-year tenure as governor, which ended in January. He helped pass legislation to tighten gun restrictions, abolish the death penalty and grant in-state college tuition to some immigrants in the country illegally. Other parts of his gubernatorial record, including higher taxes and fees he said were necessary during the recession, have not been popular among voters.

O’Malley left Baltimore after the announcement for Iowa for “meet and greet” events in Des Moines and Davenport.