President Colleen M. Hanycz wrote that due to “decreasing enrollment, high costs, and an operating structure that could only be justified at a much larger institution” the institution has “separated with 23 members of our community.” These employees include the college’s spokesman, Jon Caroulis, and his boss, Karen Geus.

Hanycz, who has been the university president for less than two months, says more changes are coming in the near future as higher education is facing a crisis nationwide.

This crisis is affecting Catholic universities in particular as parishes are shuttered and Catholic high schools consolidate. St. Joseph’s University, also located in Philadelphia, is expecting 75 fewer undergraduate students than they had in 2014 and is also planning to effect layoffs in the fall.

Drexel University also announced that it was laying off one percent of its workforce based on predictions of a smaller freshman class.

Hanycz added that the student experience at her university will not suffer. Tuition there costs $40,400, with room and board costs adding more than $13,000. Hanycz also said that she is unsure if the university will end the year with a balanced budget. 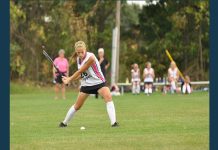 Cost keeps many kids from playing school sports, other activities