Police responded to an assault in progress call at about 6:30 p.m. on Sunday in the parking lot of a Braum’s Ice Cream and Dairy Store restaurant in northwestern Oklahoma City.

Authorities found Costello sitting in a vehicle, suffering from multiple stab wounds, including at least one to the head. He was taken to a local hospital, where he died.

Christian, Mark Costello’s 26-year-old-son, was arrested on one count of murder in the first degree.

“They were both there willingly, but as far as what set him off to attack the commissioner, we don’t know,” Balderrama said Monday morning.

Christian has been on probation since 2012 after pleading guilty to one count of assault and battery, driving while under the influence of a drug and resisting arrest. He was arrested last year for indecent exposure.

Mark Costello, 59, was married and had five children. He was a member of the Republican party and was first elected as state labor commissioner in 2010.

Costello advocated for small government and closed the Department of Labor’s office in Tulsa because he felt it was being underused. He made headlines when he compared state bureaucrats to “feral hogs” in 2011, which he later apologized for.

“I was shocked and deeply saddened to hear of Mark Costello’s tragic death last night. I am praying for his family, friends and staff,” Oklahoma Governor Mary Fallin said in a statement. “Flags on state property will be lowered to half-staff through Friday in honor of Mark Costello’s life and service to the people of Oklahoma.” 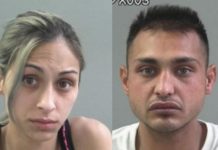