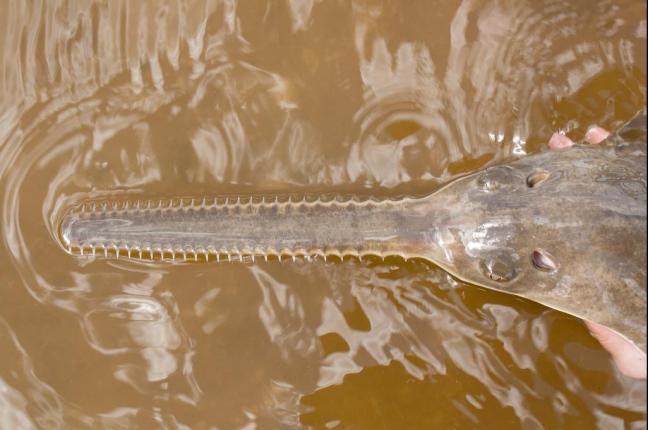 PORT CHARLOTTE, Fla., June 1 (UPI) — Researchers have found that some 3 percent of sawfish offspring in an estuary in Florida are the product of asexual reproduction, or virgin birth.

Birthing offspring without the sexual assistance of a male — a process called parthenogenesis — isn’t unheard of. Some bird, reptile and shark species have demonstrated the technique in captivity. And recent genetic testing proved the process possible. But until now, virgin births had never been confirmed in the wild.

The discovery is detailed in a new study published in the journal Current Biology.

“We were conducting routine DNA fingerprinting of the sawfish found in this area in order to see if relatives were often reproducing with relatives because of their small population size,” lead study author Andrew Fields, a marine science researcher at Stony Brook University, said in a press release. “What the DNA fingerprints told us was altogether more surprising; female sawfish are sometimes reproducing without even mating.”

The virgin-birthing fish are a species of sawfish called smalltooth sawfish (Pristis pectinata), one of five types of sawfish — all of which are endangered. Sawfish are characterized by their long, tooth-filled beaklike projection.

Abundant throughout the Atlantic a century ago, the fish are now nearing extinction. Plagued by overfishing and habitat loss, they are now isolated to small pockets of South Florida coast.

“The seven parthenogens we found looked to be in perfect health and were normal size for their age,” said Dr. Gregg Poulakis, a scientists with the Florida Fish and Wildlife Conservation Commission. “This suggests parthenogenesis is not a reproductive dead end, assuming they grow to maturity and reproduce.”