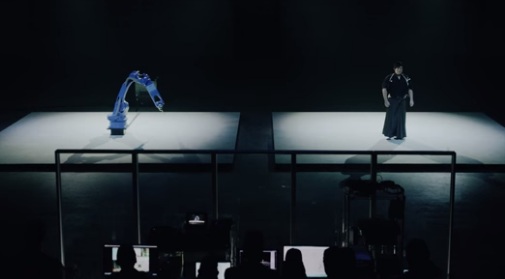 KITAKYUSHU, Japan, June 7 (UPI) — Engineers in Japan have built an industrial robot capable of perfectly executing the moves of a samurai master. In a recent exhibition, the robot, named Motoman-MH24, out-dueled its teacher Isao Machii (an actual samurai master).

Researchers at Yaskawa Electric Corporation trained their sword-wielding creation to slice and dice with the precision of Machii, essentially uploading the master’s human genius onto the robot’s software. In a recent video released by the company, Motoman can be seen bisecting fruit with one fell swoop of the katana.

Going toe-to-toe (or sword-to-sword) with Machii, let alone beating him, is no simple task — robotic exactness or not. The Japanese swordsman holds a number of sword-related world records, and is able to slice a fried shrimp in two as it flies 80 miles per hour through the air.

The Singularity may still be a way off, but robots are quickly acquiring skills — some frightening (sword-fighting), some welcomed. Robots have recently demonstrated their ability to cook, repair themselves and best table tennis champions.