Instead, the company uses a dry fog fumigation technology, which only requires the house to be empty for a few hours, and is safe for humans, pets and even houseplants, Pure Maintenance Utah CEO Brandon Adams said.

“It’s a very safe product,” Adams said. “The ingredients in the product are actually classified by the EPA as one of the seven safer choices to use as a disinfectant inside homes.

Humans and pets initially leave to avoid the acidic air associated with the treatment, which causes eye watering, Adams said. Within about four hours, the house is saturated with the dry fog treatment, and has been cleared out to make way for fresh air.

Evans said the technology is something his and Adams’ fathers came upon in about 2007.

“They stumbled across a fairly new technology to produce the dry fog fumigation,” Evans said. “Its earliest usage was in pharmaceutical clean rooms. So Mike (Adams) and my dad bought a system and they started using it to sterilize medical facilities.

“And it didn’t take long before we realized that there was application in the residential setting to use this product this process, the dry fog process. It was paired up with a really nice eco-friendly product called peracetic acid.”

The vapor particles coming from the dry fog units are so fine, they can get into seemingly sealed areas.

“It can get into walls,” Adams said. “We had a licensee text us a picture of an indicator strip inside a closed microwave, that showed the vapor had gotten into the microwave. Think of bacon. When you cook bacon, that vapors that smell gets throughout the house quickly. That’s kind of what we’re doing is creating a vapor through this dry fog that gets it really just permeates and just gets in everything.”

Many of Pure Maintenance’s clients are in real estate.

Companies have told him of getting bids from disaster cleanup companies that want to charge $40,000 “to come in and rip out sheet rock and rip out carpet and rebound insulation and redo all that,” Evans said. “And we’ll come in for, you know $2,500, and in four hours, the problem is solved.” 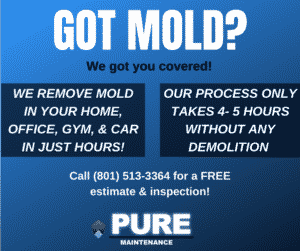 Evans said the treatment also works as a bactericide, and he especially recommends the service to anyone moving into an older home or a house with an unknown story and potentially high bacterial load.

“I would use it any home people had lived in,” he said. “Often, people keep pets, and who knows what they did in the house.”

Evans has had his own house treated each time his wife got pregnant with one of their three boys, he said, “Just as a precaution, just to make sure that I know that you know the baby’s gonna be safe from bacteria.

“Mold can generate so many problems with a large spectrum of symptoms on the allergy side, like stuffy nose, headaches, sinus problems and breathing issues,” Evans said.

Most Utahns don’t have mold simply because we live in a desert state, Evans said, but any place that has indoor plumbing has minor leaks that can add up over the years, increasing the mold load in a house. And Utah, with more basements and sprinklers than many wetter states, can have unique issues.

“That opens up Utah homeowners to a whole slew of water issues when rain gutters stop working and water pours next to foundations, or sprinklers spray onto windows or leak or even break. And window wells are a whole other way water can get into the house of someone who has a basement.”

Pure Maintenance also has relatively inexpensive test kits available for people who want to assess their mold danger before signing on.

“When I first got into this, it was with a more sales and marketing mindset,” he said. “I had no idea that that you know there was going to be this other side of it where we’re going to be able to help so many people. It’s definitely the most rewarding part now.” 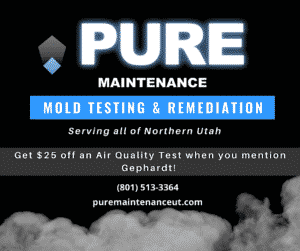