Jan. 22 (UPI) — Legendary baseball star and onetime home run king Hank Aaron, who captivated the nation almost 50 years ago when he broke the mark held by Babe Ruth, died Friday at the age of 86.

Aaron’s family said he died at his home.

“Mr. Aaron passed away peacefully in his sleep,” his assistant said. “The family asks for privacy at this time.”

“We are devastated by the passing of ‘Hammerin” Hank Aaron, one of the greatest players and people in the history of our game,” Major League Baseball tweeted Friday.

Aaron joined the then-Milwaukee Braves in 1955 at the age of 21, less than a decade after Jackie Robinson broke the color barrier with the Brooklyn Dodgers.

Aaron was sensation right off the bat, winning the National League batting title the following year and helping the Braves win the World Series with an MVP season in 1957. The team later moved to Atlanta in 1966.

In 1973, while closing in on Ruth’s all-time hone run record, Aaron endured numerous death threats and racist letters. He finished the season just short of the record, but famously topped the mark early in the 1974 season.

Aaron hit home run No. 715 in Atlanta on April 8, 1974, against the Los Angeles Dodgers — and famously was joined by a couple of well-wishers from the stands on the base path as he headed for home plate.

Hall of Fame broadcaster Vince Scully, who called the came for the television broadcast, did not sugarcoat the racial significance of the moment as Aaron crossed the plate.

“Honestly, I was scared coming to a high-profile city like Atlanta,” Aaron previously told WSB-TV. “Knowing that Dr. King was here, Andy Young and some of the other great civil rights leaders that made their home here, and I’m coming from Milwaukee where there was no activity at all.

“It makes you start thinking about what it is, what can you do, what role you can play. And makes you feel like you kind of shortchanged everybody really, you didn’t do your job.”

Aaron would go on to hit 755 career home runs, a record that stood for 30 years until San Francisco Giants slugger Barry Bonds surpassed the record in 2007 and finished with 762 home runs.

“He was a beacon for our organization first as a player, then with player development, and always with our community efforts,” Atlanta Braves chairman Terry McGuirk said in a statement.

“His incredible talent and resolve helped him achieve the highest accomplishments, yet he never lost his humble nature. Henry Louis Aaron wasn’t just our icon, but one across Major League Baseball and around the world.”

When Aaron was inducted into the Baseball Hall of Fame in 1982, he received the second-highest share of votes ever cast. He was inducted on the same day as Frank Robinson, MLB’s first Black manager.

“I feel for the first time that what I did on the baseball field has been fully appreciated by the people I played against, the people I played with and especially the sports writers,” Aaron said upon his induction on Jan. 13, 2982, as reported by UPI at the time.

“I would love to have been the first person to be voted in unanimously, but even if I wasn’t, I’m still very excited about it.” 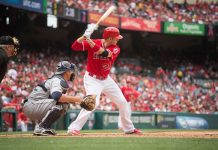 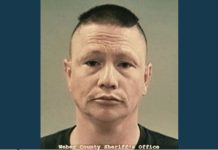 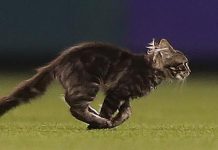