DALLAS, Nov. 2 (UPI) — A return to action on the playing field for Dez Bryant wasn’t the only thing that caught the eyes of viewers Sunday night.

During the Dallas Cowboys’ 13-12 loss to the Seattle Seahawks, Bryant was caught on camera shouting and pointing, in an energetic tirade as injured Seahawks player Ricardo Lockette laid motionless on the field.

Marcus Sullivan, a Fox26 digital reporter, posted a Vine video of the event. Sullivan posted the caption: “#DezBryant after the #Seahawks #RicardoLockette was knocked out of the game “That’s what the F He gets” smh,” attempting to lip-read Bryant.

After the game, Bryant grew irritated with reporters and defended his actions.

Seahawks linebacker Bruce Irvin, who is also pictured in the video, said Monday that “Dez was talking to the officials the whole time (and) never said anything about lock.”

“I won’t ever, ever, ever, ever wish bad on a player that’s been knocked down. C’mon, man. Stop with the [expletive],” Bryant told the reporters. “Not once did I say that’s what you get. I got on one knee and prayed for that man.

“I got on one knee and prayed for him. C’mon, man. Don’t put clips together and do that.” Bryant was blanketed by star cornerback Richard Sherman during the game and managed just two catches for 12 yards. Bryant returned for the first time in five games, due to a broken foot.

Lockette, 29, suffered ligament damage in his neck after the hit and underwent surgery Monday, according to the Seahawks. He will not play again this season.

“Doctors at Baylor Medical Center in Dallas performed successful neck surgery on Seahawks receiver Ricardo Lockette Monday,” the team said. “He is expected to remain in the hospital for a few days, but will be up and moving as soon as Tuesday, and his neurological signs are all positive.” 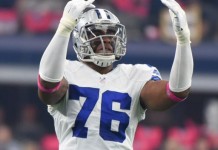 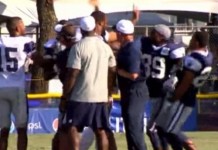 Dez Bryant Dukes it out at Dallas Cowboys Camp