GAINESVILLE, Fla., Oct. 12 (UPI) — Just as they’re rising like a rocket through the college football ranks, the Florida Gators got about the worst news they could receive Monday: Quarterback Will Grier is gone — and he won’t be back for at least a year.

The suspension was disclosed by Grier himself and head coach Jim McElwain during a news conference Monday.

Grier, a redshirt freshman, tested positive for the banned substance ligandrol, which is a supplement used to build lean muscle mass, a source told the Orlando Sentinel. In response, the NCAA levied a one-year suspension.

“I took an over-the-counter supplement that had something in it,” a highly emotional Grier told reporters Monday. “I did not check with the medical staff.”

“Will Grier won’t play this week and, obviously, in the near future due to taking a supplement, an over-the-counter supplement that had something in it that was on the NCAA list of things you an’t have,” McElwain said at a news conference Monday. “It’s something he feels horrible about. It’s an honest mistake, and yet it can be prevented by checking with our medical staff.”

The suspension couldn’t have come at a worse time for the Gators, who remain undefeated midway through the season — and are a little more than a week removed from a major upset victory over then third-ranked Mississippi, 38-10 on Oct. 3.

After their sound drubbing of Missouri on the road this weekend, many analysts continued to include Florida in the SEC conference title and College Football Playoff conversation.

The Gators, ranked No. 8 and No. 11 in the Associated Press and Coaches polls, respectively, travel to Baton Rouge this weekend to play the fifth and sixth-ranked LSU Tigers — a game sure to be laden with SEC title implications.

“They looked like a virtual lock to play for that SEC title game,” ESPN’s Danny Kanell said of Florida Monday.”

Monday’s news might have a major impact on the team’s chances going forward. Grier has been one of Florida’s main contributors this season — throwing for more than 1,200 yards and ten touchdowns. As of Monday, he is rated as the No. 38 quarterback in the country.

“To lose a player of this magnitude in the middle of the season for a year is unprecedented,” ESPN’s Southeastern Conference analyst Paul Finebaum said.

Florida can file an appeal to the NCAA ruling, but it wasn’t immediately clear whether the team would do so. One Las Vegas sportsbook changed Florida’s national championship odds from 30-to-1 to 50-to-1 after news of Grier’s suspension emerged. 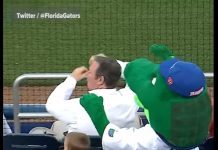