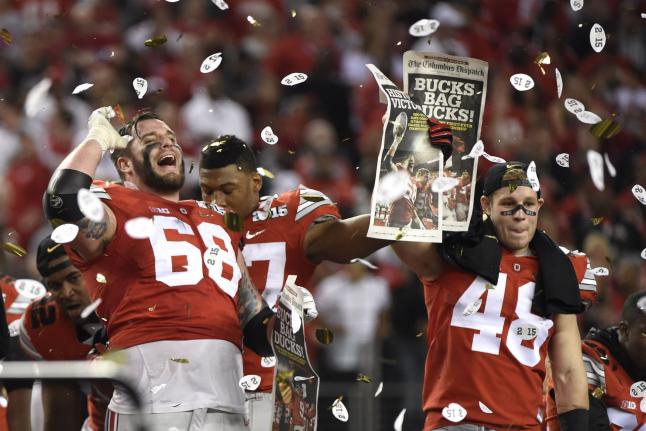 LAS VEGAS, Aug. 2 (UPI) — With the college football season a month away, a Las Vegas sportsbook says a handful of teams are receiving the most money on bets to win the 2015 College Football Playoff.

Perhaps unsurprisingly, the defending champion Ohio State Buckeyes are the overwhelming favorite to win the title again — a 3-to-1 pick at the Westgate Las Vegas SuperBook.

The Buckeyes have received four times as much money as any other team so far, ESPN reported, with odds at 5-to-2.

Ohio State has lost just three games in the last three seasons — which included an undefeated slate in 2012.

Perhaps surprisingly, Ohio State’s hated rival, Michigan, is the fifth-most popular pick — despite the fact that the Wolverines notched a losing 5-7 record and did not reach a bowl last season. Head coach Brady Hoke was fired and replaced with Jim Harbaugh, which analysts believe is the main reason for bettor optimism this year.

In fact, Michigan isn’t even ranked in the coaches’ preseason top 25 poll.

Unlike the situation with most teams, Michigan bettors will know immediately whether their money is in good hands — as the team’s very first game will be a 1,600-mile road trip to play western power Utah, which is currently favored by 6.