Aug. 16 (UPI) — Like the Summer Olympic Games in Tokyo that preceded them, the 2020 Paralympic Games will not allow spectators at any of the events, either, organizers and Japanese officials announced Monday.

The announcement was made jointly by the International Paralympic Committee, Tokyo 2020 Organizing Committee and the governments of Japan and Tokyo.

The groups said they decided to continue the no-fan policy at the Games because COVID-19 cases are still spreading at a dangerous rate in Japan.

“In light of the current emergency declaration issued for Tokyo, Saitama and Chiba prefectures … and the current infection situation broadly, more stringent measures will be taken for competitions to be held in these prefectures, including having no spectators,” the groups said in a statement.

“With regards to road events, the organizers request the general public to refrain from coming to the roadsides to watch the competitions.

“Everyone is encouraged to watch the Games at home.”

Tokyo will be under a state of emergency until at least the end of August.

The Paralympic Games will run from Aug. 24 through Sept. 5. 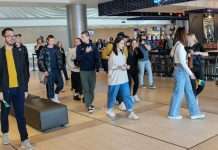