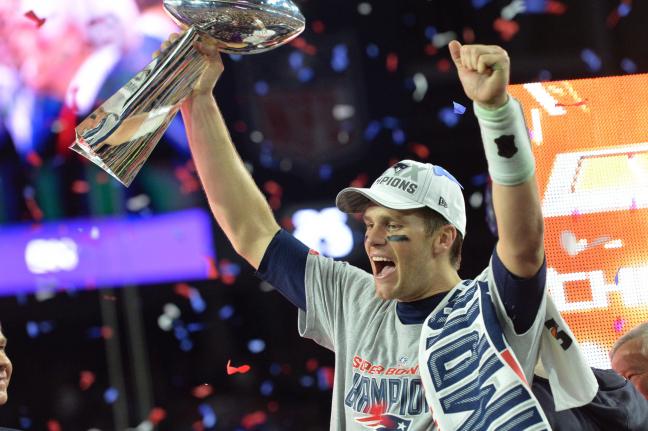 UPDATE: Patriots’ Brady Has Been Suspended by NFL for Four Games

BOSTON, May 11, 2015 (Gehpardt Daily, UPI) – The New England Patriots will have to start their season without their quarterback, Tom Brady, as according to NFL.com the league just announced he has been suspended without pay for the first four games of the season.

The Four-time Super Bowl champion and two-time NFL MVP Tom Brady has been suspended by NFL Commissioner Roger Goodell in connection with the deflating of footballs beneath the league’s minimum level, the New York Daily News reported Friday.

The report also said the Patriots have been fined $1 million and must forfeit their first-round pick in 2016 and fourth-round pick in the 2017.

The New England Patriots quarterback this week was identified by the league as one of just three people who likely knew about the underinflated balls.

The league mandates each game ball to achieve at least a gauge pressure of 12.5 pounds per square inch (psi). ESPN reported this week that the NFL’s investigation implied that Brady had asked for the balls to be inflated beneath that level prior to the AFC Championship Game against the Indianapolis Colts, which the Patriots won 45-7.

During halftime of the game, referees discovered that several of the Patriots’ balls were underinflated — as much as two pounds psi under the league minimum. A subsequent investigation determined that it’s likely that two Patriots personnel deliberately circumvented the NFL’s 12.5 psi minimum so that Brady could grip the ball better.

“I checked some of the balls this morn… The refs (expletive) us…a few of then were at almost 16 (psi),” the report quotes an Oct. 17, 2014 text message from Jastremski to McNally. The two might also be disciplined by the league.

Brady is now the highest-profile player ever suspended in the NFL’s near 100-year history. The NFL, the report states, fully believes the violations are serious and amount to cheating.

The 243-page NFL report, released Wednesday, concluded that locker-room attendant Jim McNally and equipment assistant John Jastremski were probably involved in the deflating of game balls after they had been inspected by referees — and that Brady was aware of the underinflated game balls.

Brady, however, has denied for weeks that he knew the balls were deflated beneath the league’s minimum pressure, and his agent said this week that the NFL investigation has jumped to inaccurate conclusions.

The report even makes reference to gifts given to McNally by Brady — and that references to ball deflating went as far back as May 2014. However, the report states that no one else within the Patriots organization likely knew of their activities.

The NFL’s investigative team, led by attorney Ted Wells, said in addition to ordering the balls underinflated, Brady also refused to turn his cellphone over to investigators.