Kaepernick, 27, has completed 815-of-1,360 passes for 10,030 yards, 56 touchdowns and 26 interceptions in his career. This season, Kaepernick has tossed just six touchdowns against five interceptions. The 49ers are 2-6 this season, after a 27-6 loss Sunday to the St. Louis Rams. 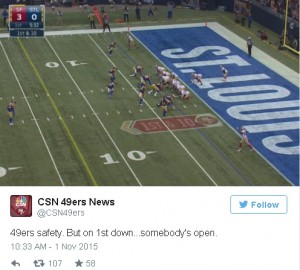 During the game, Kaepernick was caught on video as he failed to notice an uncovered Torrey Smith at the line of scrimmage. Smith waived his arms at Kaepernick, but did not get his attention, as the 49ers called a modestly successful running play.