NEW YORK, Nov. 1 (UPI) — Stanley Biwott and Mary Keitany, both from Kenya, finished first in the men’s and women’s groups at the New York City Marathon on Sunday, trekking the 26.2-mile distance in less than two-and-a-half-hours.

Biwott defeated Kenyan runner Geoffrey Kamworor by 14 seconds, and Keitany enjoyed a lead time of more than a minute over Aselefech Mergia, 30, of Ethiopia, running the last 4-mile leg of the race alone, according to The New York Times.

In the men’s wheelchair division, South African Ernst Van Dyk was victorious with a time of one hour, 30 minutes, and 54 seconds, beating Josh George of the United States by a second. Tatyana McFadden, a Russian-born American, finished in the women’s wheelchair division at one hour, 43 minutes, and four seconds, netting her a third consecutive victory.

According to The Atlantic, Biwott’s time trumps that of fellow Kenyan Wilson Kipsang, who finished last year’s marathon in two hours, 10 minutes, and 59 seconds but finished in fourth place this year.

The New York City Marathon, comprising up to 50,000 runners in its 45th year, takes an average of four to five hours to complete. 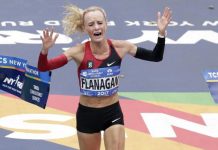 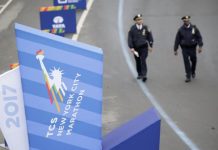