MARBLE FALLS, Texas, Sept. 7 (UPI) — Two high school football players in Texas have been suspended from school and their team for allegedly deliberately tackling a referee during a game.

The two John Jay High School, San Antonio, Texas, defensive backs could face criminal charges for one charging the referee from behind and the other for spearing at the referee with his helmet during a game in Marble Falls, Texas, about 90 miles north of San Antonio, on Friday night.

Both John Jay players were ejected immediately. The referee was “very upset” and wanted to press charges, according to Austin Football Officials Association secretary Wayne Elliott.

“The first thing we want is that those two kids never play football again,” Elliott said.

The Northside Independent School District has launched an investigation into the matter.

“This is disturbing,” Northside ISD spokesman Pascual Gonzalez said as part of the district’s official statement. “It is not the sportsmanlike behavior that we teach our students. We are cooperating fully with the University Interscholastic League with this investigation.”

“Northside ISD will not tolerate this kind of behavior,” the statement added.

Before the incident, two other John Jay players were ejected from the game on separate plays — leading many to believe the incident was retaliatory to a referee call the players disagreed with. 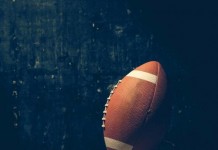