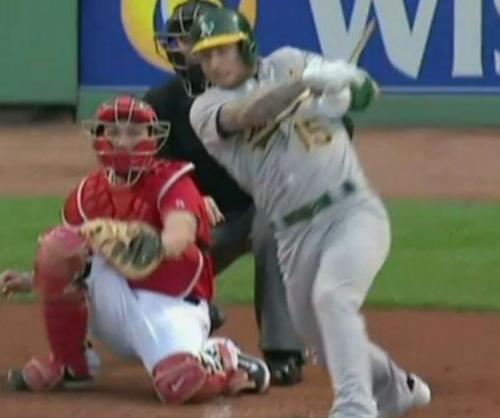 BOSTON, June 5 (UPI) — A woman sitting behind home plate during the Red Sox-Athletics game in Boston Friday was hospitalized with life-threatening injuries after she was hit in the head by a broken bat, officials said.

According to authorities, the woman was struck in the head with part of a broken bat during the game’s second inning at Fenway Park.

“You try to keep her in your thoughts and, hopefully, everything’s all right and try to get back to the task at hand,” Oakland third baseman Brett Lawrie, whose broken bat struck the woman, said. “Hopefully everything’s OK and she’s doing all right.”

The game was delayed so that medical personnel could attend to the woman, who was ultimately carried away on a medical gurney.

“I’ve seen bats fly out of guys’ hands in the stands and everyone’s OK, but when one breaks like that, has jagged edges on it, anything can happen,” Lawrie said.

“Our thoughts and concern, and certainly our prayers, go out to the woman that was struck with the bat, her and her family,” Red Sox manager John Farrell said after the game. “A scary moment, certainly.”

USA Today cited a witness in the crowd who said the woman sustained severe injuries to her face.

“All you can think about is a family, they come to a ballgame to hopefully get three hours of enjoyment, and unfortunately with how close our stands are to the field of action, an accident like this tonight is certainly disturbing,” Farrell said.

The woman’s screams could be heard throughout the crowd and even on broadcast radio, the Boston Globe reported.

Emergency personnel immediately responded to the accident. A Boston police officer swept up a young boy who had been sitting next to the woman and shielded his eyes, the Globe report said.

Boston Red Sox President Larry Lucchino went down to the field level to confer with emergency personnel. Blood covered her clothing as she lay on the gurney and was whisked past the Red Sox dugout.

The unidentified woman was conscious as she was taken out of the stadium. Authorities did not release her exact condition Friday night, but did say the injuries were life-threatening.

“Brett Lawrie hit the ball and the bat snapped in half near the end of the bat,” fan Alex Merlas said. “It hit on the forehead to the top of the head … it was a blunt trauma and it was a lot of blood. I don’t think I’ve ever seen that much blood.”