NORTH CHARLESTON, S.C., Feb. 16 (UPI) — While campaigning for his younger brother, former President George W. Bush told supporters that though they are “angry and frustrated” they need a president who has “integrity and character.”

Without mentioning Donald Trump by name, Bush drew a comparison between his brother and the Republican front-runner, calling Jeb “a man of deep and humble faith that reveals itself through good works, not loud words.”

“Americans are angry and frustrated, but we do not need someone in the Oval Office who mirrors and inflames our frustration,” the elder Bush told an audience in North Charleston, S.C., on Monday. “Strength is not empty rhetoric. It is not bluster. It is not theatrics. Real strength, strength of purpose, comes from integrity and character.”

“All of the sloganeering and all of the talk doesn’t matter if we don’t win,” he added.

The former president came under attack by Trump during the last GOP presidential debate, when he called the war in Iraq a “big fat mistake.”

Jeb jumped in to defend his brother, telling the crowd, “If I closed my eyes, I thought it was Michael Moore on the stage,” referring to the director of the 2004 documentary Fahrenheit 9/11, which condemned the Bush administration’s actions in Iraq.

Meanwhile on Monday, Trump held a press conference nearby where he doubled down on attacks against the former president that he made during the last GOP presidential debate.

“Excuse me,” Trump told reporters. “The World Trade Center came down during the reign of George Bush, right? It came down. We weren’t safe.”

He also reiterated statements in which he opposed the invasion of Iraq on the basis that it destabilized the region.

“Saddam Hussein was a bad guy,” he said of the former Iraqi president. “One thing about him: He killed terrorists. Now Iraq is Harvard for terrorism.”

“I was in the White House bunker all day helping coordinate, manage our response to 9/11,” he said. “I didn’t see Donald Trump there. I’ve never seen him involved in any way that would lead me to believe that he had any firsthand or practical experience about it.”

Cheney said the billionaire’s statements made Trump sound “like a liberal Democrat.” BuzzFeed also researched Trump’s claims to find little evidence that he was a vocal opponent of the war. 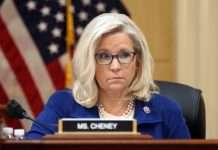