PLEASANT GROVE, Utah, June 4, 2019 (Gephardt Daily) — Emergency crews were called out to a mass casualty critical incident at the Pleasant Grove Veterans Memorial Pool late Tuesday afternoon when a pump malfunctioned, flooding the pool with chlorine that sickened many swimmers.

Capt. Britt Smith, with the Pleasant Grove Police Department, said the call reporting the incident came in at about 5:12 p.m.

In a press conference that began at about 6:30 p.m., Smith said victims’ symptoms included varying degrees of bloody noses, coughing, nausea, and vomiting, with some people in and out of consciousness.

Smith said people in this type of incident can expect upper respiratory irritation, and although he had no information as to the current condition of the victims, he said officials don’t expect any fatalities to result from this incident.

He said the task now is to determine the cause of the malfunction and see how to mitigate it in the future.

“Some government entities will need to get involved in the investigation,” he added.

Discussing the response of emergency crews, Smith said, “Anytime we have a mass casualty critical incident, that is a bad day for us. But first responders showed up and were very, very good. They got the pool evacuated right away. They set up triage quickly, and got everyone transported quickly. As chaotic as it was, it was handled very professionally.

“We treated everything like it was a critical incident. We took nothing for granted, and wanted to err on the side of caution. It’s unfortunate that it happened on the first nice day of summer.”

The pool will be closed for awhile, Smith said, but “nothing leads us to believe this (incident) was intentional. It’s not a criminal investigation — it’s more of a governmental issue. The city has a responsibility to investigate.”

He said although people were evacuated from the pool, and the pool is now closed, the general area around the pool didn’t need evacuating, because the chlorine gas was quickly dissipated by a breeze.

“We’ve trained for this exact scenario — during the Great Shake-Out — we train for chlorine gas in the pool,” Smith said. The Great Shake-Out is an annual event in which people learn to prepare for an earthquake or other disaster.

“We want to provide the best level of service that we can,” Smith said. 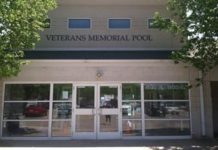