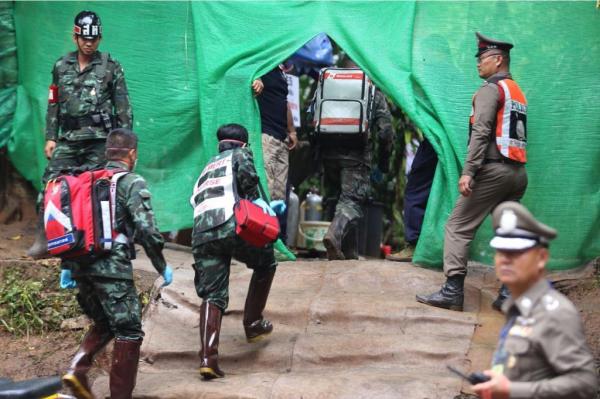 July 9 (UPI) — A fifth boy was pulled from a deep cave in Thailand Monday, leaving seven boys and their soccer coach trapped underground in rising waters.

The second phase of a rescue effort to extract several boys and a man from the cave got underway early Monday, hours after four were pulled to safety late Sunday. The latest boy to emerge was removed on a stretcher and hospitalized.

Monday’s mission began aiming to free eight boys and their 25-year-old coach, who have spent over two weeks hundreds of feet into the cave beneath Chiang Rai province.

It took hours to place oxygen tanks and guide ropes along the narrow tunnel leading to the boys. Additionally, a weir, or low dam, was built outside the entrance to keep water levels low, as heavy monsoon rains threatened to fill it and the 2.4-mile escape route.

The four boys who emerged Sunday were hospitalized in stable condition at Prachanukroh Hospital, about 35 miles away from the cave site. The hospital’s eighth floor was reserved entirely for the soccer team, whose ages range from 11 to 16.

Families have maintained a vigil at the cave entrance since the group were trapped June 23.

It took nine hours Sunday to rescue the first two boys, described as the weakest of the group. Thai Navy SEALs later announced two more had been freed in what Gov. Narongsak Osatanakorn called a “very smooth operation.”

Thirteen divers and five Thai Navy SEALs are involved in the operation, in which the trapped team must walk or wade through muddy areas of the winding cave and rising waters.

The group was stranded for nine days before two British divers discovered them in their present location. They became trapped when heavy rains produced flooding underground, a common occurrence at the cave this time of year. A Thai naval diver died of asphyxiation Friday while placing oxygen tanks in the cave. His death accentuated the hazards of the rescue and added a greater sense of urgency in getting the boys out.

Several countries, including the United States, have sent cave experts to aid in the rescue.