CLINTON, Utah, Nov. 20, 2019 (Gephardt Daily) — An Amber Alert has been issued after an infant girl was abducted from Clinton Wednesday night.

The suspect is the child’s mother, Taylor Webb, who police say does not have legal custody the 3-week-old baby. The suspect’s mother is the legal guardian of the infant, according to a statement from the Clinton Police Department.

“The suspect is identified as Taylor Cheylene Webb,” said the alert, issued at 10:49 p.m.

“She is 5 feet 5 inches tall, weighing 130 pounds. She has brown hair and tattoos on her collar bones. She was last seen wearing a gray zip up yoga pants with black and white Aviva shoes.

“The child victim is identified as Audrey Westfall. She is an infant and was wearing unknown clothing, is in a black and gray baby carrier with pink and green quilted blanket. She has brown  hair and eyes. She is one foot and zero inches and weighs about 10 pounds.”

The abduction reportedly took place sometime prior to 5:12 p.m. Wednesday.

A different version of the alert said Webb may be headed to California, Nevada or somewhere in Utah. It also said the Webb’s hair may be in a bun and she could be wearing glasses. 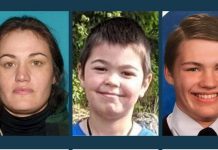