July 4 (UPI) — At least six people died in a shooting at an Independence Day parade north of Chicago on Monday, local police said.

The shooting took place just after 10 a.m. along the holiday parade route in Highland Park, Ill., about 30 miles north of Chicago, WMAQ-TV reported.

Authorities said that in addition to the six deaths, at least 16 people were hospitalized with injuries, the Chicago Tribune reported.

Witness Peter Kontonis told the newspaper he saw hundreds of people running as he drove to the parade route.

“It was chaotic. At that point I started calling my family to try to find them and eventually found out they had sheltered inside a building near the route,” he said. “And so I met up with some of my friends, we picked up some people we knew, because we wanted to make sure they had a ride, and we got out of there.”

Officers from the Highland Park Police Department, Lake County Sheriff’s Office and Illinois State Police were searching for the gunman, who was on the run as of Monday afternoon. Highland Park police patrol Cmdr. Chris O’Neill described the shooter as a white man with black hair, between 18 and 20 years old, and wearing a white or blue shirt.

Lake County Major Crime Task Force Sgt. Christopher Covelli told reporters that investigators recovered the rifle used in the shooting from the scene. He said it appeared the gunman was “shooting from a roof.” The shooter, though, is still considered to be armed and dangerous.

Nearby communities canceled July 4th festivities in response to the shooting, including in Evanston, Glenview and Glencoe.

Gov. J.B. Pritzker said he was monitoring the situation in Highland Park.

“State police are on the scene and we have made all state resources available to the community. We will continue working with local officials to help those affected,” he tweeted.

The Highland Park Police Department asked people to avoid the downtown area and the rest of the day’s July 4th festivities were canceled. 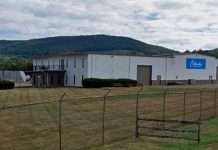 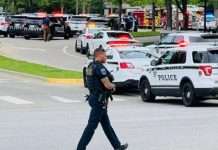