SALT LAKE CITY, Utah, May 25, 2019 (Gephardt Daily) — Fire crews are at the scene of a partial building collapse Saturday evening after the rear of the structure tumbled down, leaving piles of debris in the surrounding area.

The building has been under construction, he said. The front section is designated for commercial use, with the back section for residential.

He said the rear of the structure, which is brick and mortar, collapsed because of the water from all the recent rain in the area. It is uninhabitable.

“There was some minor cosmetic damage on surrounding buildings,” Archuleta said, but no structural damage, and no one needed to be evacuated.

Gas, water and electricity have been turned off on the adjacent building, he said, but there are no leaks and no damage to utilities as a result of the collapse. The building was empty, and there were no injuries.

Salt Lake City Building and Housing personnel are also at the scene, assessing the damage. 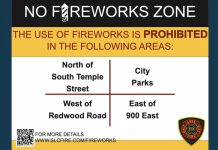 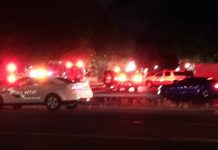