Officials believe the red spray painted message, which said “racist,” was probably the work of two or more vandals. The paint was applied in the pre-dawn morning hours of Monday, June 15, officials believe.

In addition to the word on the statue’s base, red paint had been tossed onto the statue. A red “X” also appeared on the granite sign for the Smoot Administration Building.

Police have said two people were captured on a surveillance video, but the images are not clear enough for a positive ID.

The paint already has been removed.

BYU police are asking anyone with information on the act of vandalism to call them at 801-422-2222. 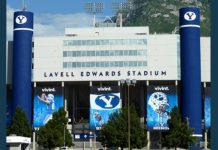