LEWISTON, Utah, March 15, 2019 (Gephardt Daily) — A Lewiston man was booked into the Cache County Jail on multiple felony charges after a police standoff on Tuesday.

Jerry Lee Gillespie, 47, was booked on suspicion of the following nine counts:

A woman called dispatch to report “… she had found drugs in her trailer that belonged to her soon to be ex-husband, Jerry Gillespie,” a probable cause statement says. “She advised dispatch that she contacted Jerry and that he informed her that if she called the police he would tell them that she planted it there.”

Deputies contacted the woman at the trailer, which was parked near Newton Dam, the statement says.

“She provided them with a green leafy substance identified as marijuana, and a black tar substance that was field tested and tested positive for heroin.”

The woman said Gillespie recently had held a nail gun to her head, causing her to fear for her life. It happened in the presence of a child, she said.

She also said that after arguments, her husband would “… pull out a firearm and sit in on the couch next to him or hold it down at his waist in a manner that she felt threatened. She stated that Jerry would never point the gun at her, just hold it in a manner that caused her to be fearful for her safety.”

A Cache County Sheriff’s deputy who talked to Jerry Gillespie by phone said he had indicated “… he would not surrender to law enforcement, and that if he saw a cop they would have a shootout. Jerry also threatened to shoot himself and stated on the telephone that Deputy Hansen could listen to him shoot himself.”

Those specific threats led to the decision to bring in the SWAT team, which arrested Gillespie – a moved he failed to appreciate, according to the court document.

“Jerry is also upset at law enforcement for the way he was taken into custody as his threats prompted a SWAT team response to safely take him into custody,”.

After his arrest a search of Gillespie’s vehicle turned up five firearms, and he admitted possessing marijuana, the statement says.

Post Miranda, Gillespie admitted to the incident involving a nail gun, but denied pushing it against his wife’s head.

“He only admitted to pointing it at her and claimed that it was not connected to an air hose,” the statement says. “Jerry admitted to the dispute where he threw a mug in front of the kids and broke it on the floor. He also admitted that the marijuana in the trailer belonged to him.”

The reporting officer asked that, “… based on Jerry’s escalating pattern of behavior and risk to public safety,” bail be denied to “allow the victims in this case to get a protective order in place and have a plan to ensure their safety.”

The request to hold Gillespie without bail was granted by 1st District Judge Brian Cannell. 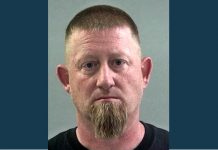 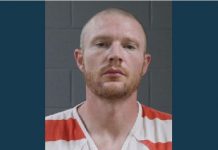