WASHINGTON, Feb. 10, 2016 (Gephardt Daily) — Republican presidential candidate Carly Fiorina became the second person on Wednesday to drop out of the 2016 race for the White House. New Jersey Governor Chris Christie announced that he would suspend his presidential campaign earlier in the day.

Fiorina made her announcement on Facebook. In a statement to her supporters, Fiorina pledged not to sit down and be quiet, but promised: “I will continue to travel this country and fight for those Americans who refuse to settle for the way things are and a status quo that no longer works for them.”

Although she didn’t mention Democratic presidential candidate Hillary Clinton by name, Fiorina urged young girls and women not “to listen to anyone who says you have to vote a certain way or for a certain candidate because you’re a woman.” Some of Clinton’s feminist supporters have recently criticized women who don’t support women for elected office.

Fiorina said feminism “is not a weapon to wield against your political opponent.” Instead she suggested, “A feminist is a woman who lives the life she chooses and uses all her God-given gifts.”

The former Hewlett-Packard chief executive placed second to last on Tuesday in the New Hampshire primary. 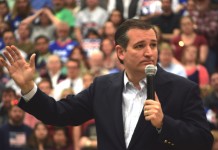