Assistant Chief Blake Christensen, Hyrum Fire Department, told Gephardt Daily the fire is still being investigated, but it appears that it was sparked by a man who was working on a car at his unit at Armor Storage, 4400 Highway 165.

Christensen said it appears that the man was using ether to start the car.

Christensen didn’t have the exact time the blaze started but said it was between 7:30 p.m. and 8 p.m. and took about 45 minutes to get it under control.

“There are five rows of units, and the fire started in the far west unit,” he said. “The roofs are gone, collapsed.”

The man who was working on the car had minor burns and was treated on scene and released.

Christensen estimated the damage at well over $1 million. 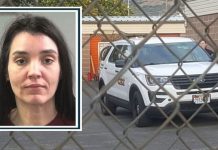