TIANJIN, China, Aug. 13 ( Andrew V. Pestano ) — The death toll following the two massive explosions in the port city of Tianjin, China, has risen to at least 44 people, including at least 12 responding firefighters.

At least 520 people are hospitalized with injuries — 66 of which in critical condition, according to Xinhua, China’s official news agency.

Firefighters were responding to a fire report at the Ruihai warehouse in Tianjin’s Binhai New Area at about 10:50 p.m. local time. The warehouse stored “dangerous and chemical goods,” which slowed down firefighters’ efforts.

At about 11:30 p.m., an explosion rocked Tianjin with a second, more powerful explosion following seconds later. A fireball shot into the sky that could be seen from space. Hundreds of cars were burnt, office blocks were destroyed and buildings within a radius of 1.5 miles had windows blown out.

About 1,000 firefighters, using 140 fire trucks, fought flames through the night. Tianjin has a population of about 15 million people and is located southeast of Beijing, China’s capital.

The warehouse was owned by Tianjin Dongjiang Port Rui Hai International Logistics Co. Ltd., founded in 2011, which stores and distributes containers of “dangerous goods” at Tianjin’s port. Executives of the company are being interrogated by Chinese authorities.

The explosions registered on earthquake equipment in the area — the second, and most powerful, explosion was measured at a magnitude of 2.9, the equivalent of 21 tons of TNT.

“I felt the ground shaking and my door was making a big noise,” Tang Lei, a local resident, told NBC News. “I thought it was an earthquake. Then I went to the window and saw a very huge cloud about [over one mile] from my house. Several minutes later, the second explosion happened and we could feel it very strongly. The cloud was as high as a 20-floor building.”

Photographs and video taken in the aftermath of the blasts showed large-scale damage to infrastructure and a lot full of brand new vehicles. Several buildings collapsed due to the explosions, state news media reported. 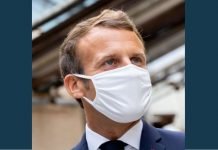