SALT LAKE CITY, Utah, July 3, 2020 (Gephardt Daily) — Fire crews responded to a two-alarm blaze in the area of 200 E. South Temple on Friday night and pulled out all stops in working to get the fire under control.

Traffic to the area was blocked from all directions as crews battled the blaze at a 3-story wooden home that also was threatening an adjacent Big-O Tire store.

Dozens of residents from the Brigham Young Apartments stood on balconies or lined South Temple Street as firefighters worked for over an hour in an attempt to bring the fire under control.

It was unclear if the structure was occupied.

Gephardt Daily has a crew on scene and will update this developing story as more information becomes known. 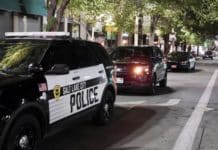 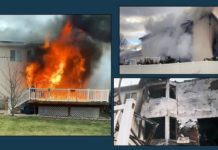