WASHINGTON, D.C., Jan. 11 (UPI) — House Democrats introduced a single article of impeachment during a session Monday and appear to have enough support for its passage — but Republicans blocked unanimous consent for a separate effort to remove President Donald Trump under the 25th Amendment.

During a pro forma session, House Democratic leader Steny Hoyer asked for unanimous consent from all members in approving a resolution that calls on Vice President Mike Pence to invoke the 25th Amendment and declare Trump “incapable of executing the duties of his office.”

The “Raskin Resolution” urges Pence to “convene and mobilize the principal officers of the executive departments of the Cabinet,” “activate the amendment” and “immediately exercise powers as acting president,” and gives him just one day to respond after its approval.

Republican Rep. Alex Mooney of West Virginia objected to the request and forced the measure onto the floor for a vote Tuesday.

The resolution was introduced as tensions at the Capitol were still high Monday, five days after a violent siege by thousands of the president’s supporters that came after an inflammatory rally by Trump and his allies in front of the White House.

If Pence fails to cooperate by invoking the 25th Amendment, the House will focus on a second impeachment. Monday, Democrats in the chamber officially introduced an article that charges Trump with high crimes and misdemeanors for inciting an insurrection and disrupting the transfer of power to President-elect Joe Biden‘s administration.

The article cites his baseless and repeated claims about “widespread voter fraud” in the weeks after the 2020 presidential election as a key contributing factor to last Wednesday’s riot.


“Thus incited by President Trump, members of the crowd he had addressed, in an attempt to, among other objectives, interfere with the joint session’s solemn constitutional duty to certify the results of the 2020 presidential election, unlawfully breached and vandalized the Capitol, injured and killed law enforcement personnel, menaced members of Congress, the vice president, and congressional personnel, and engaged in other violent, deadly, destructive, and seditious acts,” the article states.

The article needs support from at least 217 members of the House to pass. Politico and CNBC reported Monday that there is already support from more than 200.

Five people died as a result of Wednesday’s assault.

If Pence doesn’t respond, the House intends to vote on the article of impeachment, as soon as Wednesday, House Majority Whip James Clyburn said.

If the House votes to impeach Trump for a second time, a trial in the Senate would likely be two or three months away — a strategy to enable Biden to focus on other time sensitive matters, like the coronavirus pandemic and confirmation for his Cabinet nominees.

Trump was first impeached by the House about a year ago for abuse of power and obstruction of Congress stemming from discussions he had with Ukrainian President Volodymyr Zelensky about investigating Biden. The Senate later acquitted Trump of both charges.

If the article is passed, Trump would be the first U.S. president in history to be impeached twice. 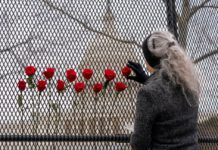 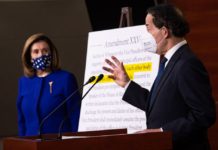 Pelosi introduces bill to set up commission on presidential capacity