DUBOIS, Idaho, Dec. 24, 2018 (Gephardt Daily) — Idaho State Police stopped a pickup truck for a traffic violation in Clark County and discovered more than 800 pounds of marijuana after obtaining a search warrant for the truck and the trailer it was pulling.

The traffic stop occurred the evening of Dec. 15 on Interstate 15 near milepost 167, north of Dubois, an ISP news release said.

During the traffic stop, an ISP canine indicated the presence of drugs, so a search warrant was issued for the truck and trailer.

The search turned up over 800 pounds of marijuana, valued at more than $3 million.

Jonathan D. Speckman, 37, of Hainesville, Illinois, was arrested and booked into the Clark County jail for trafficking marijuana, the news release said.

The Clark County Sheriff’s Office assisted in the investigation. 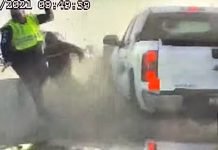