Jan. 6 (UPI) — President-elect Joe Biden called on President Donald Trump to “step up” and appear on national television to put an end to violent protests at the U.S. Capitol on Wednesday.

Speaking from Wilmington, Del., Biden decried the “unprecedented assault unlike anything we’ve ever seen in our times.” He described the Trump supporters who breached police barricades and entered the Capitol as “a small number of extremists.”

“Let me be very clear. The scenes of chaos at the Capitol do not reflect the true America,” he said.

“I call on President Trump to go on national television now to fulfill his oath and defend the Constitution and demand an end to this siege,” Biden added.

Shortly after, Trump released a recorded message urging his supporters to “go home.”

Thousands of Trump supporters stormed the Capitol as lawmakers debated certification of the electoral votes that gave Biden the presidency in November.

The violence forced Capitol Police to evacuate the building, bringing the certification process to a halt.

Biden described the certification as a “sacred ritual.”

“The purpose is to affirm the majesty of the American democracy,” he said. “Today is a reminder, a painful one, that democracy is fragile.”

“We shall nobly save, or meanly lose, the last best hope of earth. Other means may succeed; this could not fail. The way is plain, peaceful, generous, just — a way which, if followed, the world will forever applaud, and God must forever bless.”

Biden added: “The way here is plain, too. It’s the way of democracy, of respect, of decency, of honor.

“There’s never been anything we can’t do when we do it together.” 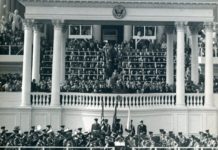