At about 3:13 pm., a Range Rover was westbound on State Route 40 near the Heber City limits, while a Subaru Legacy and a Dodge pickup pulling a trailer were eastbound in the same area, a UHP news release states.

A westbound passenger car was slightly ahead of the Range Rover and was stopped in the multipurpose lane, waiting to turn left.

“Preliminary evidence shows the Range Rover’s driver allowed his vehicle to drift left out of his travel lane,” the news release says.

“The Range Rover continued into the eastbound travel lanes and struck the Dodge pickup’s trailer.”

According to UHP, the Range Rover continued to the right, and its left front struck the left front of the Subaru Legacy.

The male driver of the Subaru had to be extricated from the vehicle, which took almost an hour. He was flown by medical helicopter to University of Utah Hospital in extremely critical condition.

Troopers are still investigating the cause of the crash.

Gephardt Daily will provide more information on this accident as it becomes available. 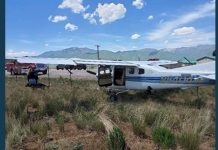