Carter’s body was found Wednesday in her apartment at 500 N. Bluff St.

According to a news release, Kevin Ray Mcatlin, a “person of interest” in the case, was arrested early Saturday morning in the Moab area.

“The condition of (Carter’s) apartment and suspicious circumstances began an ‘all hands on deck’ investigation as evidence and information developed over the course of the hours and days following the discovery,” the release states.

As the SGPD Investigations Division pursued leads, witnesses and physical evidence, they determined that Mcatlin was a person of interest in the case.

An arrest warrant was obtained for Mcatlin by Friday evening, and he was found and taken into custody in the early hours of Saturday morning.

SGPD is not releasing more information at this time, as evidence is being processed and officials are still working on the case.

The release acknowledges the “hard work and long hours of our detectives,” and expresses thanks to everyone who provided information and support to the investigation.

At this time, we want to take a moment to express our sincere condolences on behalf of the St. George Police Department to the family and friends of Elizabeth Carter. You are in our thoughts during this difficult time. 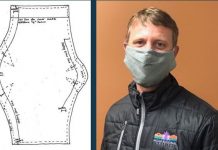