MILLCREEK, Utah, April 25, 2020 (Gephardt Daily) — A Millcreek man is facing felony charges after police say he was found in a shared apartment with a puppy that was beaten nearly to death.

Officers were summoned on Feb. 7 to an eastside apartment complex, regarding a wanted person.

“Upon arrival, I located Mr. Lopez at the residence with a black lab on the floor, whimpering, and unable to walk.”

Lopez, who had active felony warrants for his arrest, was cuffed and taken into custody, the statement says.

“Mr. Lopez was also found in possession of a loaded 9 mm firearm which he advised he purchased for protection for his family.”

An indictment filed Friday adds more details, saying the complainant awoke to the sound of Lopez beating the puppy., and observed “blood on the walls and the feet of Lopez.”

The man said he tried to open the bathroom door, but Lopez shut it. The man said he grabbed his niece and the gun near Lopez’s bed and left the house “because he was scared of what would happen.”

An officer from Salt Lake County Animal Services noted the puppy on the living room floor, unable to move his hind legs, salivating profusely, with signs he was in shock, the indictment says. The officer also observed signs the puppy had serious internal injuries, and was in need of immediate medical care, the document says.

Court paperwork does not reveal if the puppy survived. 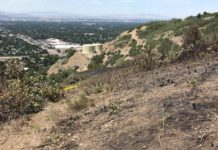 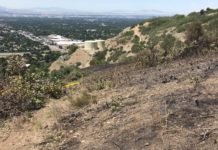