Capt. Henry, with the Riverdale Fire Department, said crews were dispatched at 11:20 p.m. and arrived to find that the fire was in the exterior overhang and sign on the front of the building at 1090 W. Riverdale Road.

A light, steady rain beat down on everyone as they climbed ladders and opened up the section of the overhang to see how far the flames had extended.

“It was only on the exterior. We had fire control in about 20 minutes,” Henry told Gephardt Daily. “We don’t know the cause yet. The fire is under investigation, and we’ll go back in the morning.”

No estimate of damages was available Tuesday night.

This was the second fire in six months at Aaron’s. A small fire broke out on Christmas Day last year in the same area of the building. Capt. Henry had no information on the cause of that fire. 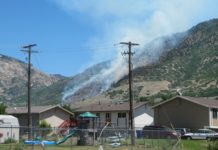