Dec. 4 (UPI) — The parents of a Michigan teen suspected in the Oxford High School shooting pleaded not guilty Saturday to four counts of involuntary manslaughter.

The Crumbleys were arrested overnight after a tip led authorities to a commercial building in Detroit, where the couple appeared to be hiding after they missed their arraignment that was scheduled for Friday afternoon.

After an hours-long manhunt, they were booked into the Oakland County Jail, where their son, Ethan Crumbley, 15, also is in custody.

Oakland County Sheriff Michael Bouchard said during a press conference Saturday that the office pursued the couple and did not wait for them to turn themselves in.

“As soon as the prosecutor gave some indication that there would be potentially charges, our detectives began to do what we call a packet to prepare for it: their charges, where they might go,” he said. “We began to do what we could to look for them, short of what the expanded capabilities are when you have an actual warrant, either a search warrant or an arrest warrant.”

Attorneys Shannon Smith and Mariell Lehman said Friday that the Crumbleys weren’t fleeing and intended to appear for arraignment.

“They are absolutely taking this case seriously,” Lehman said during Saturday’s hearing, which was held by video conference. “They are devastated by the events in the Oxford incident. This is not something that’s being taken lightly by them or us.””Mr. Crumbley, as with Mrs. Crumbley, is not a flight risk,” Lehman said. “He is not a danger to the community. There’s no risk that they’re going to flee prosecution. They were never fleeing prosecution.”

A local business owner called 911 after seeing the suspect vehicle in a parking lot in Detroit with a woman near the vehicle, the Washington Post reported.

“They were in a commercial building in a room. We were able to take them into custody without incident. However, they were very distressed as they were walking out,” Detroit Police Chief James White said during a news conference early Saturday.

Authorities set up a perimeter around the building, where officers from the Detroit Police Department, U.S. Marshals and the Oakland County Sheriff’s Office were on the scene.

“This isn’t indicative of turning themselves in, hiding in a warehouse,” White said.

The chief said the Crumbleys didn’t break in to the industrial building, and police are investigating one other person suspected of assisting the couple.

“We believe they were assisted in that location, to get there and get in,” Bouchard said. “We’re gathering information and will present that to our prosecutor for potential charges for either aiding and abetting, or obstruction of justice.”

James and Jennifer Crumbley each face four counts of involuntary manslaughter for each of four students who died in Tuesday’s attack at Oxford High School near Detroit.

Ethan Crumbley is charged as an adult with terrorism and four counts of first-degree murder and gun-related charges.

The teen reportedly opened fire hours after his parents were called to the school and advised by school officials to get their son in counseling within 48 hours, Oakland County District Attorney Karen McDonald said Friday. The meeting was held after a teacher saw a note including disturbing drawings depicting a bloody scene and the words, “The thoughts won’t stop. Help me,” she said.

The Crumbleys left the school without checking whether their son had the gun in his possession, McDonald said.

McDonald said social media posts indicated the weapon was a 9mm handgun purchased by James Crumbley as a Christmas gift for Ethan Crumbley days before the shooting.

U.S. Marshals had released wanted posters Friday offering up to $10,000 in the search for the Crumbleys.

Bouchard on Saturday said the sheriff’s office has been “inundated with threats” in the wake of the shooting. 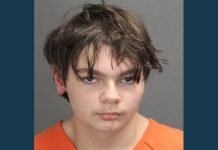