CAYCE, South Carolina, Feb. 18, 2020 (Gephardt Daily) — A law officer from the South Carolina city of Cayce has shared previously withheld details in the case of 6-year-old Faye Marie Swetlik, who disappeared on Feb. 10 and whose body was found three days later.

Chief Byron Snellgrove, Cayce Department of Public Safety, told reporters last week that items found in the trash can of Cody Taylor, 30, linked him to the missing girl.

On Tuesday, Snellgrove revealed the nature of those items. There were two — a girl’s polka dotted boot and a soup ladle with fresh dirt packed on, as if the kitchen utensil had been used as a digging tool.

Snellgrove also told reporters Tuesday that DNA tests linked Taylor and Faye Swetlik. Snellgrove did not specify the source of the DNA tested.

Snellgrove said Taylor was among the area residents contacted after Faye’s disappearance, and that he had readily cooperated with police and allowed his residence to be searched.

Snellgrove said police realized new evidence might be found discarded on trash day, so they worked with collectors to sift through refuse as each trash can was collected.

Snellgrove said he was on the scene when the boot and ladle were found. After seeing the ladle, Snellgrove immediately walked to the nearby woods, searched previously, and found Faye’s body, he said.

Snellgrove also said all trash cans, as well as sheds, ditches and outbuildings, had been searched early on and repeatedly. Snellgrove said he did not know where Faye’s body could have been hidden prior to the morning it was found.

Shortly after the garbage can discovery, police responded to a call concerning a neighbor bleeding on a patio, and found Taylor, deceased, Snellgrove said.

Police followed up on 283 hotline tips, Snellgrove said. Officers on the search grew quickly from 50 to 300. Every door in Churchill Heights has knocked on, he said.

Video from more than 50 locations was pulled, and some shows Taylor doing actions that were “suspicious,” Snellgrove said.

Officials also spoke with Taylor’s roommate, who had been away at the time Faye went missing and seemed to have no knowledge of what had happened.

The officer invited local people to a vigil scheduled for tonight, Feb. 18, saying it was organized to support Faye’s family and help them and the community begin to heal.

Cayce officials on Saturday released the emotional 911 call made on Feb. 10, after 6-year-old Faye Marie Swetlik was discovered missing.

In the recording, the child’s mother, sobbing, tells an operator that Faye was last seen an hour earlier, and describes what the little girl was wearing.

The recording is even harder to listen to knowing the outcome of the investigation. Investigators revealed in a news conference on Thursday that Faye’s body had been found in a wooded area in her neighborhood, and a man from the area was found deceased in his residence.

On Friday, the Cayce Department of Public Safety called another press conference to update: Investigators found evidence in the trash can of the deceased man — Taylor — and that evidence linked Faye to Taylor.

The investigation is ongoing, but officials wanted citizens to know they believe there is no dangerous suspect outstanding, they said at a Friday news conference.

To hear the 911 call, which many will find disturbing, click on the player below. 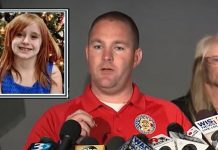 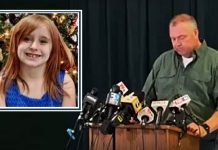