OGDEN, Utah, June 2, 2020 (Gephardt Daily) — A rolling candlelight vigil is planned for Thursday night to honor Ogden Police Officer Nate Lyday, who died in the line of duty on May 28.

The vigil is scheduled to begin at 9 p.m. at 2186 Lincoln Ave. The complete timeline and route are shown at the end of this story.

His police vehicle will be placed in front of Lindquist Field, where it will remain through the funeral services. This will be the end of the rolling procession and a gathering place for those who are attending.

According to the news release, approximately 2000 blue LED candles will be distributed at the front of the Francom Public Safety Building and along the route at the slow down locations.

“Our hope is that this vigil will be an opportunity for Officer Lyday’s family, his Ogden Police family, and his community family, to remember, honor and mourn him.”

The Memorial Vigil itinerary is as follows: 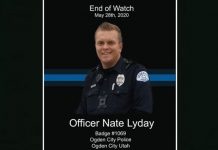