Police were called at about 2 a.m. that Thursday, before the Memorial Day weekend, to Utah Village Motel, 271 W. 900 South, on a report of threats from an armed man.

Two officers on foot found the man walking away, and chased him from a parking area and along a sidewalk. Hearing the radio call, another officer approached in a patrol car, to cut off the suspect’s escape route.

The video shows police catching up with the suspect, Palacios-Carbajal, and at least one yelling repeatedly for him to drop the gun.

More than 20 shots suddenly ring out. Palacios-Carbajal can be seen falling to the ground, and police continue to yell at him to drop the gun and “show us your f***ing hands.”

In addition to the statement pertaining to the video, the council released details about items that may be discussed at the upcoming work session on Tuesday.

The Salt Lake City Council’s statement on the video follows:

We feel outraged at the death of Bernardo Palacios-Carbajal. We are angry about having someone shot and killed in our City. We weep with Bernardo’s family.

We recognize that people in our community are not interested in words. Everyone is waiting to see action. There are existing processes and systems in place and while they may be flawed, the law requires us to see them through. We want to be clear that we do not accept those systems as they are. Everything about this needs to be examined.

We believe the current system that allows these type of events to continue is unacceptable. We will not stand by and allow the current systems to fail us again and again. There are long and short term changes that we hope to consider but changes will come. The Council will work with the City Administration, the State and others to encourage changes that are outside of the Council’s scope.

It is also our job to represent the sentiments of the public on these matters. We commit to you to take a comprehensive look at all the factors that contribute to these tragic events. And we invite you to engage with us in that effort.

In our duty as Council Members, we will be having a full conversation this coming Tuesday to discuss how we as a City can do better in these situations. We will review the Police Department budget and look at accelerated, additional and necessary police training, body cameras, changes to the Police Civilian Review Board, and holding some of the budget appropriation for further discussion. Together we can make real change. It will take work and time.

Our whole nation is grieving on so many levels, and the death of Palacios-Carbajal adds another level of profound grief that will be felt here in Salt Lake City and nationwide.

We call on residents to demonstrate peacefully. Let Salt Lake City lead the country in seeking justice without resorting to violence.

Under the above statement, the council listed “More details on items that could be discussed on Tuesday at the Work Session”: 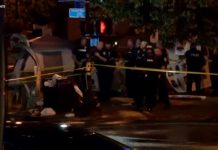 Man fatally shot during protest at parking lot in Louisville, suspect in custody 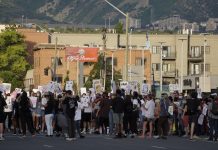