SOUTH SALT LAKE, Utah, Nov. 17, 2019 (Gephardt Daily) — South Salt Lake firefighters are mourning the loss of one of their own this weekend.

The cause of death was not released, but authorities do not believe it was suspicious.

The SSL Fire Department shared a badge on Facebook with the addition of the thin red line, a symbol used by fire departments to show respect for fallen firefighters. The Facebook page also said more information on Groves’ passing was forthcoming.

Other Stories of Interest:  Man in critical condition after box truck overturns on southbound I-15 in Midvale

Multiple agencies posted support for SSLFD on social media, including Utah State Firefighters, who posted on Facebook: “You are in our prayers.”

Groves is survived by an adult son, officials said.

Details of his funeral services have not yet been announced. 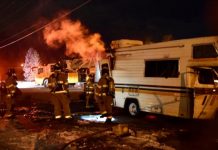