The St. George Police Department released a statement shortly after 11 p.m. Tuesday, saying that a school resource officer was able to identify the person who sent the text message.

The student and his parents were interviewed, after which the student was arrested and taken to the Juvenile Detention Center.

The student has been charged with a third-degree felony, the SGPD statement says.

“Snow Canyon Middle School Administrators, as well as Washington County School District Administrators are aware of this situation and we appreciate all their cooperation during this investigation,” SGPD said. 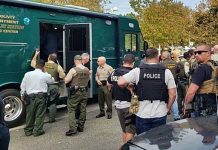