LONDON, Dec. 6 (UPI) — Metropolitan police in London are investigating the stabbing of three people in a London Underground station Saturday night as a terrorist attack.

One man was seriously injured and two others received minor injuries from the man who witnesses reported yelled “this is for Syria” several times after he was handcuffed by police, reported NBC News.

Following terror attacks in Paris in mid-November, the British Parliament voted on December 2 to authorize military strikes against the Islamic State, also referred to as Daesh and by the acronyms ISIL and ISIS. The aim of the airstrikes was expected to be terror targets in Syria, joining coalition forces already doing so.

“We are treating this as a terrorist incident,” said Commander Richard Walton of the Metropolitan Police’s Counter-Terrorism Command, according to the BBC. “I would urge the public to remain calm, but alert and vigilant. The threat from terrorism remains at severe, which means that a terrorist attack is highly likely.”

One witness, Michael Garcia, told the BBC he was walking to the station when he saw people running from what he thought was a fight, until he saw a man “lying on the floor with a guy standing next to him brandishing a knife of about three inches.”

“It had a thin blade, but looked fairly long,” Garcia said. “He was screaming ‘go on, then, run’ to everyone else. He was pacing back and forth next to the guy on the floor. He came up to the barriers.”

The man was Tasered by police and arrested, with witnesses saying he was yelling “this is for Syria” as he was led out of the station. Bystanders reportedly shouted at him, and one tried to throw a bottle, before he was taken to a waiting police van. 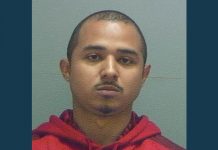