SOUTH SALT LAKE, Utah, Nov. 8, 2019 (Gephardt Daily) — A Tooele man, who first responders say was “talking and yelling” moments after slamming his pickup into a highway pillar Friday night, ended up being rushed into surgery after suddenly going into full cardiac arrest.

South Salt Lake Police spokesman Gary Keller said the 56-year-old man was driving a 2007 Dodge pickup truck south on Main Street shortly after 5:30 p.m. when he crossed into the northbound lane near 2400 South and struck a concrete highway pillar.

When police and fire department first responders arrived, the man appeared to have non-life-threatening injuries, Keller told Gephardt Daily, and was transported to the hospital.

At the hospital, the officers learned that the man had gone into full cardiac arrest, had been revived, and was rushed into surgery.

Police also learned that when the truck reached the tow yard, it caught fire, most likely because of an electrical problem, Keller said. He did not know the extent of fire damage to the truck. 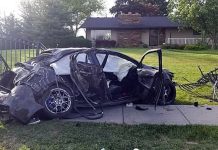 Five people transported to hospital after single-vehicle crash in Kaysville