April 28 (UPI) — For the first time in 34 years Friday, a sitting U.S. president attended and addressed the annual convention of the National Rifle Association in Atlanta.

President Donald Trump spoke for about 30 minutes at the gathering, and was preceded and succeeded on the stage by a number of other conservative politicians.

In his remarks Friday, Trump thanked his supporters and pledged to guard gun rights in the United States.

“I know I speak for everyone in this arena when I say we are all proud, indeed, to be an American,” Trump said before praising the late actor Charlton Heston, who served as the NRA’s president for years.

Before talking about gun rights, though, a boastful Trump again — as he has done a number of times in the last six months — spent the first seven minutes talking up his election night victory over Democratic nominee Hillary Clinton.

“Wasn’t that a great evening? Do you remember that evening?” he said. “To run the whole East Coast and then you go with Iowa and Ohio and all of the different states, it was a great evening.

“Not going to forget that evening.”

“Big sports fans have said that was the single most exciting event they have ever seen. That includes Super Bowls and World Series and boxing matches,” he continued. “I have a feeling that in the next election you’re going to be swamped with candidates but you’re not going to waste your time.

“You’ll have plenty of those Democrats coming over and you’re going to say, ‘No sir, no thank you’ — ‘No ma’am,’ perhaps ma’am. It may be Pocahontas, remember that. And she is not big for the NRA, that I can tell you.”

In the past Trump has referred to outspoken Democratic Sen. Elizabeth Warren as “Pocahontas” because the Massachusetts lawmaker once said she has Native American ancestry.

When the talk finally turned to guns, the president promised to uphold the Second Amendment.

“You help safeguard the freedoms of our soldiers, who have bled and died for us on the battlefield,” Trump told the crowd. “We are doing a really top job already — 99 days and already with the Veterans Administration people are already seeing a big difference.

“It’s been a tough fight against those who would go so far as to ban private gun ownership entirely. But I am here to deliver you good news. … The eight-year assault on your Second Amendment freedoms has come to a crashing end.”

Reaction to Trump’s words was quick.

“It’s time for our elected officials to listen to the American people, protect our communities, and reject the gun lobby’s extreme agenda,” former congresswoman Gabrielle Giffords, who was shot in the head in an assassination attempt in 2011, said via Twitter.

“This administration and this Congress have governed with cruelty and have broken every promise they have made to the American people,” Sen. Brian Schatz, D-Hawaii, said in a response from Senate Democrats. “Donald Trump promised time and time again to ‘drain the swamp,’ but he has filled the swamp in his first 100 days.”

Before Friday, the last sitting president to address the NRA convention was Ronald Reagan in 1983.

Trump also praised the law enforcement community during his speech.

“Our police know that responsible gun ownership saves lives,” he said. “And that the right of self-defense is essential to public safety. Do we all agree with that?” 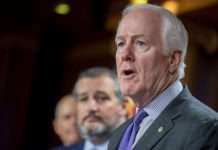