Trump coasted to victory with nearly half the vote Tuesday. Sen. Marco Rubio, R-Fla., came in second with 24 percent and Sen. Ted Cruz, R-Texas, was close behind in third with 21 percent. Dr. Ben Carson came in fourth with 6 percent, and Ohio Gov. John Kasich brought up the rear with 3 percent.

But despite the relatively small number of delegates gathered from Nevada, it was Trump’s third-consecutive win and he took note of the sense of momentum the victory gives his campaign.

“We might not even need the next two months,” he said of winning the GOP nomination.

The Rubio campaign, in finishing second to Trump, continued to go after Cruz.

“Check out how much Senator Cruz and his allies invested into Nevada for the past year in the air and on the ground only to be rejected yet again.”

“One week from today will be the most important night of this campaign,” Cruz said looking ahead to Super Tuesday which includes a primary in Cruz’s home state. “I cannot wait to get home to the great state of Texas.”

The caucuses were plagued by reports of ballot shortages, unchecked IDs and allegations of voter intimidation.

“It’s not against the rules for volunteers to wear candidate gear. Volunteers went through extensive training & are doing a great job.”

A reporter for Mashable tweeted that volunteers at another precinct were not checking IDs, and one caucus-goer voted for Trump twice.

The Nevada GOP issued a statement saying they received several complaints from all over the state and were investigating the allegations.

CNN reported Trump appeared at one precinct, causing chaos, while casino magnate Sheldon Adelson showed up to another, creating a similar fuss.

While Trump stands to gain 30 delegates in Nevada, winning another state will only add to the momentum of his campaign. As it stands, Trump has 67 delegates — more than five times that of Cruz and Rubio, and more than 10 times that of Carson and Kasich.

As the field of candidates gets thinner each week, tensions are rising among them.

Earlier Tuesday, Trump told a Las Vegas crowd he would like to punch a protester in the face. Monday, Cruz’s campaign fired communications director Rick Tyler after he tweeted a video that claimed to show Rubio disparaging the Bible. Trump wasted no time using the incident to criticize Cruz for firing Tyler “like a dog.”

“Like most Americans, I was proud that we broke the color barrier when he was elected, but I also recognize that his experience and my experience are night-and-day different. He didn’t grow up like I grew up by any stretch of the imagination,” Carson said. “Not even close.”

Kasich, for his part, is skipping another primary night celebration to get the jump on Super Tuesday states. He was scheduled to hold town halls in Atlanta on Tuesday while Nevada Republicans chose their nominee. 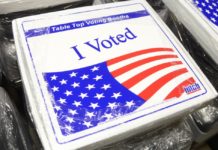