SEVIER COUNTY, Utah, April 14, 2018 (Gephardt Daily) — Two 12-year-olds were injured Saturday when a large ATV rolled on top of them at the Monkey Tail riding area east of Salina.

The two juveniles, a boy and a girl, were riding without helmets or other gear, according to a Salina City Police Department post on Facebook.

Salina City Police Chief Al Taylor told Gephardt Daily that the boy was transported to a local hospital, where he was treated and released later Saturday.

The girl was flown by Airmed to Primary Children’s Hospital in Salt Lake City, and Taylor said he had heard from her mother that she was “doing much better than expected” and that both youngsters are doing OK.

Chief Taylor said both of the children have helmets, and they had been told by their parents to wear them.

His concern extends beyond Saturday’s accident, which shook everyone up in the small town, where Taylor said “everybody knows everybody.”

“It isn’t just kids. A lot of adults ride ATVs up here. It’s almost a rite of passage,” he said. “I just really don’t want to see people get hurt.”

“Everyone, for the love of your family, friends and this small town, PLEASE always wear a helmet and other protective gear while riding.” 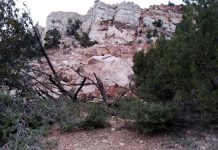