SEVIER COUNTY, Utah, Sept. 18, 2020 (Gephardt Daily) — Two people are dead and one has been hospitalized after a head-on collision Thursday night in Sevier County.

“It was reported that the vehicle was traveling east in the westbound lanes,” a statement from the Utah Department of Public Safety says.

“The small white vehicle traveling wrong direction struck a Ford Expedition head-on,” the DPS statement says. “After the head on, the Ford Expedition was struck from behind by a semi truck. The Ford Expedition rolled down the road and into the median, landing on its wheels and catching on fire.

One deceased person was visiting from Romania, and DPS is working with Romanian consulate services to notify their next of kin. At present, no victims’ names have been released. 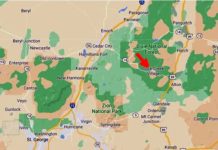